Is France really in debt?

To determine whether or not France is in debt, and at what level, we shouldn't look at the report "Government debt / GDP" that - this report is a chimera, see "A misleading indicator"- but the debt of France all actors together, then adding the debt of businesses, households and the government towards actors outside our borders.

Banque de France publishes an annual "current account" which describes the exchange of goods, services, income and current transfers with the outside. The balance of this account is that France borrowed (or lend) each year. His examination will show us that France is not in debt, at least for now ...

This balance is measured in current euros. If we want to show its intensity, we have therefore to compare it to a stream in current euros. The ratio which seems the most significant is "current account balance / GDP in value," ans the series available on the websites of INSEE and Banque de France allow us to calculate it from 1949 to 2010. Chart 1 describes its evolution: 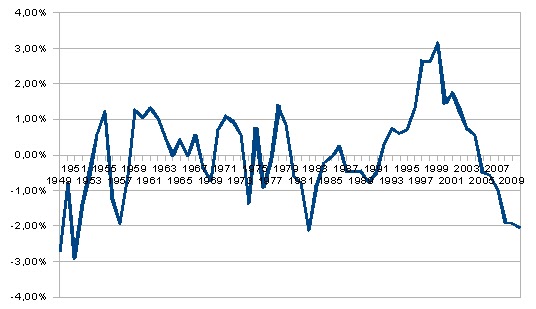 The 1990s have been good years in terms of the debt of France but this advantage was reduced after 2000.  From 2005 on, France fell into debt each year a little more - that is to say it was more likely to consume more than it produces (and invest, but investment was relatively low in recent years).


* * * *
For sure such a situation is not healthy because a country can not live indefinitely beyond its means. But all this relates to the annual flow of indebtedness, what about the level of the debt?

To evaluate this level, one has to accumulate the yearly current account balance. This accumulation is measured in nominal value, as always with debt, and old values count little compared to recent values because the latter are swollen by inflation.

The debt of France was certainly not zero in 1949, but its nominal value was low in front of the recent nominal flow. Let us therefore do as if it were zero: the balance of assets and debts of France is represented by the cumulative current account since 1949 as shown in chart 2: 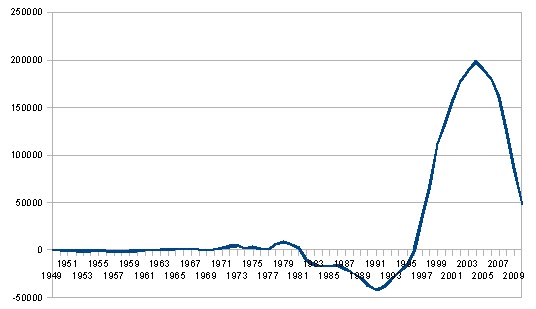 Chart 2: Balance of claims and debts of France
Surprise ! If we trust this indicator, France is not in debt today. But it will probably soon ...

The curve is very flat until the early 1980's because the image of past values is compressed by the inflation that followed. The debt increased in the 1980s and reached a maximum of 42 billion in 1991. Afterwards assets accumulate: debt cancels in 1996 and France becomes increasingly creditor, a maximum of 198 billion being reached in 2004. Then the flow of debt reduces quickly the assets, and at the end of 2010 France is creditor of only 47 billion.

One can draw two lessons from this quick exercise:
1) the current situation is not good: France borrows some forty billion per year, or 2% of its GDP, and this can not continue indefinitely;
2) however, it is still a creditor of 47 billion euros vis-à-vis the rest of the world, thanks to the stock of assets accumulated during the 1990s and that has not yet been entirely spent.

If the current trend is unfavorable, the fact remains that for the moment France is not in debt, on the contrary. But if this trend continues the stock of assets will soon be spent: one can expect that France will actually indebted in the course of 2012.


* * * *
Finally, let us mention a necessary precaution: we acted as if the current account balance was a certain value. But Banque de France publishes each year an "errors and omission" account whose amount is not negligible and there is no guarantee that errors are compensated.

Our conclusion is probably qualitatively correct in so far as the magnitude of the current account balance is correct, but the quantitative assessment of the current balance of debts and assets is necessarily imprecise - but no more than the ratio "Government Debt / GDP" that everyone speaks of, and that is logically absurd.
Posted by Michel Volle at 6:42 AM

Email ThisBlogThis!Share to TwitterShare to FacebookShare to Pinterest
Labels: Economics